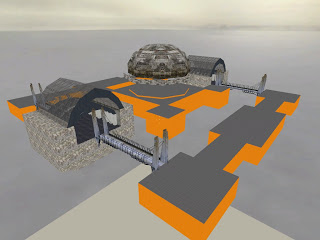 When I was finishing up work on the original Koti I was having trouble letting go. I wanted to get the map out the door but it just didn’t feel complete. The deforms were not quite right, I didn’t add sound, and I couldn’t fully test it. I finally slapped a *_b1 onto the end a released it as a beta. Now a year later I’m ready to finish the job.

I lost the source to koti_b1 in a hard drive crash and was with out a video card for some time. For awhile I was not sure what would become of the map. It was good enough but it didn’t feel finished. Then one day while waiting for my ENG 102 to start I found myself drawing out a new layout. This became the new Koti.

A few days ago the real work started. I started with the middle island. This island was the last one I made in the original. I felt that I could get a good feel for the size of the map from here. The island now has four ad ons in each corner to hold some spare ammo.

One of the hardest parts of this island was the dome. Before I used a tutorial as the base to build it but it caused errors this time around. This one was built from 3, 360 arches stacked up and then vertex manipulated. I decide to texture it and add it’s rim. I hope to one day make it a prop…

Oddly enough, the side islands were last to be created. Originally one of the hallways with the arches was the whole map. I just made one as a test and the rest of the map grew from it and older ideas. 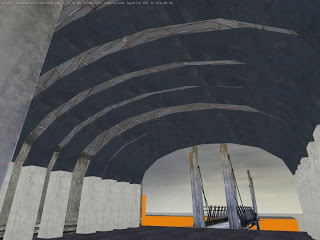 Now a rough version of the whole map is done with some texturing. Next up detailing it!